Today we traveled 66 miles and locked through the Ortona and Franklin Locks.  In the past six days we've traveled a total of 417 miles from Jacksonville to Cape Coral, Florida.  The landscape changed to orange groves and beautiful farms with alpacas, cows and horses.  The captain even saw a baby gator swimming today.  We're glad to be home.

Say Good-Bye is still for sale and will be listed with a broker in a few weeks and will be shown in a boat show on November 14 on the Riverfront in Ft. Myers.

Here are some of today's photos:


Posted by Celeste Yost at 9:10 PM No comments:

Today we traveled 68 miles and crossed the State of Florida East to West.  We crossed Lake Okeechobee which was barfy the earlier part of the morning with north wind and the waves abeam.  I was happy when the channel made a left turn and the Lake got nice and smooth.  We locked through the St. Lucie Lock with a rise of 14 feet, the Port Mayaca Lock with a rise of 1 foot and lastly, the Moore Haven Lock with a 1 foot drop.

We tied up at the beautiful Moore Haven City Dock @ $1 per foot, including water and electricity. The town is  about five minutes from the Moore Haven Lock.  It is immaculately clean and the properties well maintained.  There is a new IGA Market a six-block walk from the dock.  We had heard of a Mexican Restaurant in town, but learned it was closed on weekends,however, one of the locals suggested we have dinner at the Fraternal Order of Eagles which is about a block from the dock.  We were very pleased with our dinner of swai fish sandwiches, tossed salad, fries and sweet tea.  All this for $13 plus tip.  Our meal was very good, the service was good, too, and everyone was friendly and welcoming.  This is a "must stop" town.


Posted by Celeste Yost at 8:43 PM No comments:

Today we traveled 79 miles from Melbourne to Stuart, FL.  We are anchored in Four River Loop near Stuart along the East/West portion of the ICW.  We passed by Del Ray Beach, Vero Beach, Ft. Pierce and Stuart and saw several mama and baby dolphins, but no photos today.

Posted by Celeste Yost at 7:45 PM No comments:

Yesterday we traveled 78 miles and anchored in Rockhouse Creek near New Smyrna Beach.  Dredging is going on in the anchorage, but the work crew allows space for boats to enter and anchor which we did.

Today we traveled 76 miles and are anchored in Melbourne.  Today we saw dolphins everywhere  - they are such amazing majestic creatures.  I took lots of photos and a video (see link below).  The weather was cool and a bit overcast most of the day, temps in the low 70s and low humidity.

Today I called the surgeon and he prescribed a MRI of my right shoulder -- that's been scheduled for October 31 and he'll see me to interpret the MRI on November 1.  I am praying I did not re-tear my right rotator cuff that was repaired in 2008.  Left shoulder is great!   Other than that, we're purring along and enjoying the ride.

Copy and paste this link in your browser for the Youtube video of the dolphins:

Here are a few photos:


Posted by Celeste Yost at 8:35 PM No comments:

This morning the Captain weighed anchor at 7:15 AM and we continued south from Ponte Vedra Beach enjoying a beautiful sunrise.  It's a perfect day on the ICW -- temperatures in the low 70s with sunshine and blue skies.

We have limited internet capability on this trip so I'm writing this as we travel instead of at the end of the day, as I may not be able to connect later.

By 9:30 AM we were passing under the St. Augustine Lions Bridge and were hailed by cruising friends on Silver Queen, whom we met earlier this year in Marineland.  They expressed their condolences about Striper and told us they, too, had lost their Portie only six weeks ago.  We certainly know their grief over their beloved dog.  How kind of them to also ask how my shoulder was coming along.  It's doing great!

I had my left shoulder rotator cuff surgically repaired on July 17 and saw the doctor in August when he allowed me to drive and sent me to physical therapy.  I saw him again on October 4 after I'd been to 2 months of physical therapy twice a week.  He was pleased with my progress and cleared me to go back to the gym to take yoga and pilates and to ride my bike in November and also to make this boat trip now.  Great news!

On a happier note, we thoroughly enjoyed spending the summer in Florida.  This was the rainiest summer in 80 years we were told, but even though we had a lot of rain, the sun came out every day.  I've gotten 3/4 of "Confessions of a Deaf Psychiatrist" written and hope to have it ready to publish in January 2014. My gym friends have included me in their monthly luncheons and I even played a little mah jongg.   Ralph has gotten back to his fishing clubs and being out on the water.  He is happy to say he has finally been able to catch redfish and snook -- now he wants to learn the technique for catching tarpon.


Posted by Celeste Yost at 2:18 PM No comments: 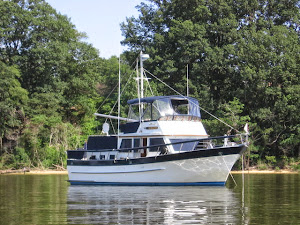 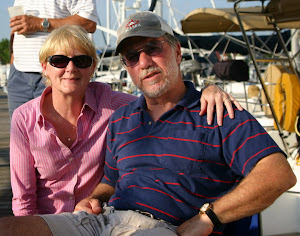 In loving memory of our Striper 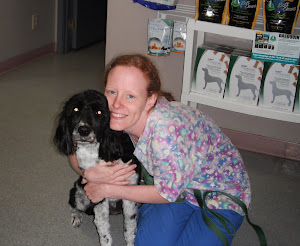 This is the last photo we have of Striper. It was taken May 22, 2013 at Northfield Animal Hospital just after Jen had groomed her. She is sadly missed by us all.

Points Along Our Route